Launch facilities at Cape Canaveral were spared any significant damage as Hurricane Dorian churned northward off Florida’s east coast earlier this week, and employees at the spaceport resumed their normal work Friday.

No spaceflight hardware was damaged in the storm, which brought high winds and heavy rain to Florida’s Space Coast overnight Tuesday into Wednesday, according to NASA.

“Officials determined the center received some isolated damage and limited water intrusion, along with some beach erosion, although the storm surge was less than expected,” NASA said in a statement.

Programs with work centered at the spaceport lost about a week of schedule time due to the hurricane, according to Patricia Sanders, chair of NASA’s Aerospace Safety Advisory Panel.

Hurricane Dorian interrupted testing of the mobile launch tower for NASA’s Space Launch System heavy-lift rocket at pad 39B. Using an Apollo-era diesel-powered crawler-transporter, teams rolled the 380-foot-tall (115-meter) structure from pad 39B back inside the Vehicle Assembly Building at Kennedy on Aug. 30 for safekeeping during the storm.

The hurricane stalled over Grand Bahama Island, then turned northwest to track parallel to Florida’s east coast. The turn spared the Space Coast a direct hit from Hurricane Dorian.

The center of Hurricane Dorian passed about 80 miles from Cape Canaveral.

According to a Kennedy Space Center spokesperson, the storm brought peak winds of 71 mph at the 50-foot level of the ocean-side launch pads in the Complex 39 area, and 61 mph at the Shuttle Landing Facility northwest of the Vehicle Assembly Building.

Ground crews will roll the SLS Mobile Launcher back to pad 39B Tuesday to resume testing, a NASA spokesperson said Friday.

The Mobile Launcher arrived at pad 39B on June 28 for a round of final tests before officials declare it ready for stacking of the first Space Launch System rocket, the vehicle NASA says will carry astronauts to the moon, perhaps as soon as 2024. NASA said the testing was about 80 percent complete before teams configured the Mobile Launcher to return to the VAB due to Hurricane Dorian.

VIDEO of #HurricaneDorian shows 62 mph wind and rain whipping thru Kennedy’s Launch Control Center parking lot at 3am 🌬 🌧 Data from our 250 foot tower clocked the top windspeed at 90 mph. The closest approach Dorian’s eye to the Cape was 70 nautical miles. pic.twitter.com/QR4fB9hZ89

During the Mobile Launcher’s ground verification campaign, which was previously expected to conclude by the end of September, engineers planned to run a series of tests, including swing arm retractions to mimic their function during a launch countdown, and pumping cryogenic liquid hydrogen and liquid oxygen propellants through the structure’s plumbing for the first time.

In recent weeks, teams conducted water flow tests on the Mobile Launcher at pad 39B to check the performance of the sound suppression and ignition overpressure systems, which reduce the heat and acoustic energy generated as the SLS main engines and solid rocket boosters fire up at liftoff.

The launch tower’s verification tests at pad 39B were about 80 percent complete before teams stood down ahead of Hurricane Dorian, NASA said.

Other programs affected during the closure of the Kennedy Space Center and Cape Canaveral Air Force Station this week included Boeing’s Starliner commercial crew capsule, which is built inside a former space shuttle processing hangar near the VAB.

Two Orion spacecraft, which will launch atop the SLS, are also being tested inside Kennedy’s Operations and Checkout Building. The Orion capsules are designed to ferry astronauts to the moon.

United Launch Alliance and SpaceX rocket boosters are also at Cape Canaveral being prepared for future missions. There were no reports of damage to either company’s launch facilities or flight hardware.

“Initial reports show no damage that will affect mission operations, but we have had window, door, roof, power and HVAC (heating, ventilation and air conditioning) damage which will require repairs,” a base spokesperson said. “Our beaches have also incurred erosion that will need to be remediated.”

The 45th Space Wing is also supporting the Defense Department’s hurricane relief operations in the Bahamas.

Here’s a video of #starship from today pic.twitter.com/pbTDLoK9CP

Meanwhile, SpaceX is building a prototype for the company’s Starship vehicle a few miles southwest of Kennedy Space Center in Cocoa, Florida. The Starship prototype, which could begin test flights from pad 39A in the coming months, appeared to survive Hurricane Dorian unscathed. 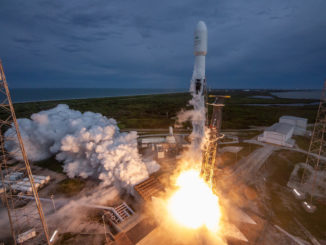 Photos: Falcon 9 rocket takes off with the Amos 17 satellite 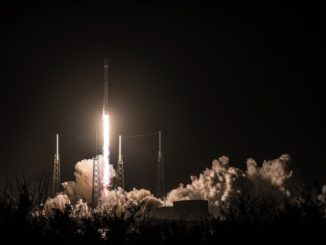