Rocket Lab’s next launch from New Zealand, set for Friday, will carry a data recorder to measure the aerothermal environments encountered by the Electron launcher’s first stage during descent back into the atmosphere, information engineers say is crucial to successfully achieving the company’s newly-announced plan to recover and reuse the booster.

The U.S.-New Zealand launch services company announced plans Aug. 6 to recover the Electron rocket’s first stage and its parachute in mid-air using a helicopter, then reuse the booster for another mission.

Peter Beck, Rocket Lab’s founder and CEO, said the company will follow a “stepping stone approach” to first measure the extreme aerodynamic and heating environments the Electron booster encounters during re-entry back into the atmosphere. Then engineers will add a decelerator and parafoil to slow down future rockets, enabling a ship-based helicopter to swoop in and snag the booster with a boom.

In the first phase of the rocket recovery effort, Rocket Lab aims to recover a full Electron first stage from the ocean downrange from the company’s launch base in New Zealand, before moving on to mid-air retrievals by helicopter.

“Electron is going reusable,” Beck said in the Aug. 6 announcement at the Small Satellite Conference at Utah State University in Logan, Utah.

In an interview with Spaceflight Now after the announcement, Beck said that achieving a high launch cadence, and not cost reductions, was the primary impetus behind Rocket Lab’s decision to try recovering the Electron booster.

The Electron rocket is made of two stages and stands more than 55 feet (17 meters) tall. The launcher is sized to launch small satellites, with a lift capacity of around 330 pounds (150 kilograms) into a 310-mile-high (500-kilometer) sun-synchronous orbit.

Headquartered in Huntington Beach, California, with a launch base New Zealand’s North Island, Rocket Lab charges around $5.7 million for a dedicated commercial satellite launch. Two of Rocket Lab’s U.S. government launch contracts, with DARPA and NASA, were valued at $6.5 million and $6.9 million, respectively.

That price point is far less expensive than any other commercial launch provider currently in operation offering dedicated flights to low Earth orbit. Smallsats booking launches on rideshare missions, in which they share a larger rocket with other satellites, can often find cheaper rides, at the expense of full control over the launch schedule and target orbit.

Beck said Rocket Lab’s customers are more interested in schedule assurance than cost. The company eventually aims to launch as often as once per week. So far this year, Rocket Lab has launched three times, with another launch scheduled Friday from the company’s launch base on Mahia Peninsula in New Zealand.

“We’re rapidly trying to do everything we can to increase launch cadence,” Beck said. “We’ve built four-and-a-half acres of new factories. We’re really all in on increasing launch frequency, and what recoverability gives us is, even if we can use the stage just once more, that essentially doubles our production and doubles the amount of flight opportunities for our customers.

“Right now, the Electron is the only dedicated small launch vehicle flying, so we’re really struggling to keep up with demand, and even though we have really invested in scaling, this is another initiative to help make more launch slots available,” he told Spaceflight Now in an interview. “Frequency here is just the most important thing.”

The successful recovery and reuse of the Electron’s first stage could also reduce costs, but that is a secondary objective, Beck said.

“If we can recover a stage in great condition, then there are a lot of cost savings there,” Beck said. “Of course, it’s a great way to keep driving the market in the right direction.”

Rocket Lab currently builds Rutherford engines, which burn kerosene and power both stages of the Electron launcher, at the company’s headquarters in Huntington Beach. The Electron’s tanks and carbon fiber structures are manufactured in Auckland, New Zealand.

“Right now, we’re shipping a launch vehicle every 30 days, and we need to get that down next year to one every 15 days,” Beck said. “And if we really want to get down to to the ultimate goal of one a week, then reusability certainly aids us in that enormously.”

Rocket Lab is also building a new launch pad at the Mid-Atlantic Regional Spaceport at Wallops Island, Virginia. The Virginia launch facility should be ready for operations by the end of this year, according to Beck.

Rocket Lab’s eighth Electron launch, scheduled for 1257 GMT (8:57 a.m. EDT) Friday, will carry a data recorder dubbed “Brutus” to measure the environments the first stage sees when it comes back to Earth.

On a typical Electron launch, the first stage’s nine Rutherford engines fire for around two-and-a-half minutes, then shut down at an altitude of more than 250,000 feet (80 kilometers) moments before the booster jettisons from the Electron’s single-engine second stage.

“Our next flight is quite an important one because we have an instrument on-board, called Brutus, which is attempting to ride the stage all the way (back to Earth), even to where it breaks up, and we’ll go back and recover that flight recorder (in the ocean),” Beck said.

“It’s a high-fidelity data recorder,” Beck in his Aug. 6 announcement at the Small Satellite Conference. “We’ll have a lot more understanding of the environments, and then we can use all that information to validate our CFD (computational fluid dynamics) models and all our other trajectory models.”

On the 10th flight of the Electron rocket, expected before the end of this year, Beck said Rocket Lab plans a “big block upgrade” of the launcher’s first stage. The upcoming upgrade caused Rocket Lab officials to announce the recovery and reuse plans ahead of time.

“On Stage 1, people are going to see some bits on that look a little bit different, so the gig was going to be up pretty soon,” Beck said.

The upgrades to be installed on the first stage beginning with the 10th Electron flight consist only of recovery systems, Beck said.

“If you’re flying with us, don’t anybody panic,” Beck said. “All of these upgrades are completely standalone to Electron. They don’t interface to any of the current flight systems. They’re all passive.”

Beck declined to describe details of the aerodynamic decelerators, including whether Rocket Lab is developing rigid or inflatable deceleration systems. He said the rocket recovery effort is, so far, an internal research and development project within Rocket Lab.

“That’s one of the things we haven’t disclosed too much, some of the unique technology that we’re developing,” he said in an interview. “So we’re going to leave that under our hats for a while, but we did have to develop new things to be able to get ourselves comfortable to the point where we think this is a feasible thing.”

Beck said Rocket Lab expects the addition of new recovery hardware on the first stage will result in a 10 to 20 percent reduction in the Electron rocket’s payload lift capacity.

“But we also have other performance upgrades to the upper stage that will probably null that out,” Beck said. “Nothing’s for free, especially on a launch vehicle.”

Rocket Lab officials previously said the company had no plans to recover and reuse the Electron booster.

“It’s incredibly difficult,” Beck said. “I’ve said very publicly that we wouldn’t be able to reuse because I had a fairly good understanding of the physics involved. The re-entry profile is enormously difficult. Basically, we’re going from eight-and-a-half times the speed of sound to 0.01 times the speed of sound in 70-odd seconds. The energy that you’ve got to dissipate is just phenomenal.”

“When we’re entering (the atmosphere),” we generate a lot of shock waves, and shock-shock interactions, and the plasma around those shock waves is equal to about half the temperature of the sun,” Beck said. “So we have tremendous aerothermal loads.”

The aerodynamic loads encountered by the first stage during re-entry are equivalent to the force of the weight of three elephants, Beck said.

“So you have a 1.8-millimeter (thick) carbon fiber rocket with three elephants standing on the top, hitting loads half the temperature of the sun, re=entering the earth’s atmosphere at eight-and-a-half times the speed of sound. We’ve got to get it down safely and in one piece, so there’s lots of really big challenges here to try and deal with.”

Dedicated smallsat launchers, such as Rocket Lab’s Electron, fly with thinner performance margins than bigger rockets. Because of that, many companies working on commercial smallsat launchers are designing expendable vehicles.

SpaceX uses propulsive maneuvers using leftover propellant in the first stage tanks to recover the boosters of its Falcon 9 and Falcon Heavy rockets.

For the Falcon 9 rocket, setting side propellant to return the first stage to a controlled landing on an offshore drone ship cuts the launcher’s lift capability to geostationary transfer orbit — a popular destination for commercial communications satellites — by about 15 percent, according to performance data presented last year by Hans Koenigsmann, SpaceX’s vice president of build and flight reliability.

Rocket Lab would have to increase the size of its Electron rocket to carry enough extra propellant to attempt a propulsive landing like SpaceX’s Falcon 9 booster, Beck said.

Beck said flight data from the Electron’s previous missions demonstrated to Rocket Lab engineers that recovering the first stage would be possible. He compared the Electron to a “flying laboratory” with 15,000 channels of data streaming on every flight.

“So we’re able to get really, really good data on the vehicle — on the stage — and how it behaves, and from that data, we’re able to start building on that element and CFD (computational fluid dynamics) models, and really start to either convince ourselves that this is possible or not possible,” he said.

Early on, engineers are interested in gauging the plasma flow fields around the first stage as it re-enters the atmosphere.

Beck would not predict when Rocket Lab might successfully recover an Electron first stage.

“Getting it through the atmosphere … is an immensely challenging task. A lot of people, when they see the animation, think that picking it up with the helicopter kind off looks like it’s the difficult bit, but honestly that’s quite trivial compared to actually re-entering the stage and getting it back through (the atmosphere) in one piece.”

Catching the booster with a helicopter would prevent the rocket from splashing down at sea and becoming contaminated with salt water.

While the initial re-entry experiments could begin before the end of this year, Beck said an intact recovery of an Electron booster will come some time after the 10th Electron flight.

“The first approach is Flight 8 (scheduled for Friday). We have some important instrumentation to help validate our computational fluid dynamic models, and then on Flight 10 we have a block upgrade,” he said.

“From Flight 10 onwards, there will be incremental rollouts of various systems and technologies, and w have a lot to learn,” Beck said. “We’re confident we can get there, but we have a lot to learn. It’s a very methodical approach for us.”

Rocket Lab plans to conduct the first booster re-entry and recovery attempts over the Pacific Ocean after launches from New Zealand. Eventually, the company could try similar experiments after launches from Virginia, once the U.S. launch pad is operational.

“If we have one (reuse), that doubles our production rate,” he said. “That would be fantastic.” 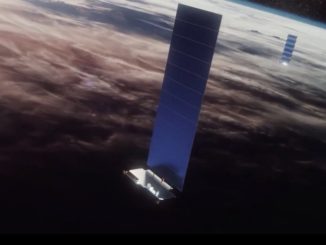 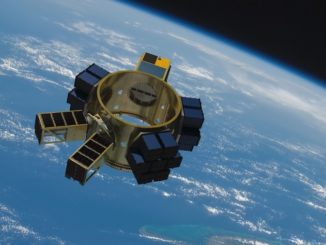 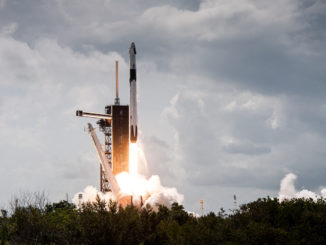 Photos: Falcon 9 and Crew Dragon blast off from pad 39A