A Russian Progress cargo freighter lifted off Wednesday from Kazakhstan on top of a Soyuz-2.1a booster and completed a record-breaking 3-hour, 19-minute pursuit of the International Space Station with an automated docking to deliver 2.7 tons of food, fuel, water and other supplies.

The Soyuz rocket took around nine minutes to deliver the Progress MS-12 cargo freighter into orbit.

After separating from the Soyuz third stage, the Progress supply ship unfurled its power-generating solar panels, then began a series of maneuvers to match its orbit with that of the space station more than 250 miles (400 kilometers) above Earth.

The 3-hour, 19-minute flight from liftoff to docking set a new record for the fastest trip to the International Space Station, beating the flight time of the previous Progress resupply mission in April by two minutes.

The Progress MS-12 supply ship carried more than 2,600 pounds (1,200 kilograms) of dry cargo to the space station inside the spacecraft’s pressurized compartment, including scientific equipment, components for the life support system, food, clothing, medical supplies and personal items for the research lab’s six-person crew, according to Roscosmos, the Russian space agency.

The cargo mission is designated Progress 73P in the sequence of resupply and crew delivery flights to the International Space Station.

The Progress MS-11 supply ship, loaded with trash, undocked from the Pirs module early Monday, heading for a destructive re-entry to end its mission. Most of the spacecraft, which arrived at the space station in April, was projected to burn up during re-entry, with any remaining debris expected to fall into the remote South Pacific Ocean.

The arrival of a Russian Progress cargo freighter Wednesday marked the second supply delivery to the space station in less than a week. A SpaceX Dragon supply ship arrived at the station Saturday with 5,097 pounds (2,312 kilograms) of experiments and equipment after a two-day flight from a launch pad at Cape Canaveral.

Russian teams at Baikonur are preparing another Soyuz launch Aug. 22 with the unpiloted Soyuz MS-14 spacecraft. The mission will test the compatibility of the Soyuz MS-series spacecraft with the Soyuz-2.1a launcher, which Russia plans to begin using for crew missions next year.

The Soyuz-2.1a features a new digital guidance system and other upgrades, allowing it to carry several hundred pounds more cargo into orbit. The Soyuz-FG rocket variant currently used to ferry crews into orbit will be retired after a launch in September.

The Soyuz MS-14 spacecraft will launch without the life support systems needed for a crew flight, allowing teams to pack additional cargo into the capsule. The spacecraft will dock with the space station Aug. 24 for a 13-day stay, during which time cosmonauts will unpack the supplies and load items for return to Earth.

The Soyuz capsule parachute to a landing in Kazakhstan in early September with up to 1,100 pounds (500 kilograms) of equipment, significantly more cargo than a Soyuz crew vehicle typically returns to Earth.

Meanwhile, a Northrop Grumman Cygnus cargo craft that arrived at the space station in April is set to depart Aug. 6 to begin the final phase of its mission, including the deployment of several CubeSats before burning up during atmospheric re-entry.

The Progress MS-12 spacecraft that arrived at the station Wednesday is expected to remain docked to the orbiting research outpost until December. 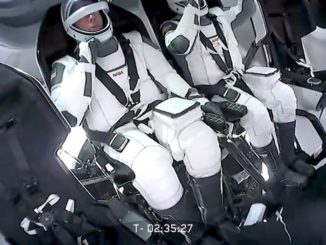 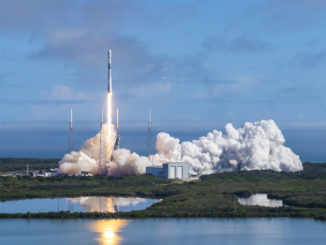 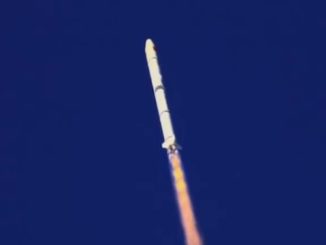