A break in thunderstorms streaming across Central Florida allowed a SpaceX Falcon 9 rocket and Dragon cargo capsule to blast off Thursday from Cape Canaveral in pursuit of the International Space Station with a new docking mechanism, a spacesuit and 40 mice acting as high-flying research specimens.

Flying off Cape Canaveral’s Complex 40 launch pad with 1.7 million pounds of thrust, the Falcon 9 rocket turned to the northeast and soared into space over the Atlantic Ocean.

SpaceX called off a launch attempt Wednesday due to the threat of lightning at Cape Canaveral. The company previously ordered a three-day delay from a July 21 target launch date to repair a liquid oxygen leak on the rocket.

Bad weather threatened again Thursday to prevent the Falcon 9 from launching, but the clouds cleared in the final hour of the countdown.

Nine Merlin 1D engines, chugging kerosene and liquid oxygen propellants, pushed the Falcon 9 rocket into the upper atmosphere in less than two-and-a-half minutes. The first stage booster switched off its engines and separated to begin a series of maneuvers to reverse course and return to landing at Cape Canaveral Air Force Station a few miles south of the launch pad.

The first stage braked for landing using the booster’s center engine, then extended four legs before touchdown at SpaceX’s Landing Zone 1, a seaside facility once used as a launch base for Atlas rockets. Sonic booms accompanied the landing around eight-and-a-half minutes after liftoff, marking the 44th successful recovery of a Falcon booster by SpaceX since 2015.

The booster launched and recovered Thursday helped carry SpaceX’s most recent Dragon cargo mission aloft in May. NASA and SpaceX could use the same rocket again for the next Dragon resupply mission, set for launch in December.

“It’s impressive every time you see it,” said Bill Spetch, deputy manager of International Space Station transportation integration at NASA’s Johnson Space Center in Houston. “It was great to see this one land successfully because we flew this booster on our previous mission. So this has been one that we’ve used before, and will probably use again.”

A camera mounted to the Falcon 9 booster recorded this spectacular view of the rocket coming back to Cape Canaveral and sticking a picture-perfect landing. https://t.co/vvymGAaHzZ pic.twitter.com/pgmVSwpy1G

While the first stage came back to Cape Canaveral, the Falcon 9’s second stage ignited a single Merlin engine to rocket into orbit with the Dragon cargo capsule. The automated supply ship separated from the upper stage nearly 10 minutes into the mission at an altitude of 129 miles (208 kilometers).

Moments later, SpaceX confirmed the Dragon cargo freighter primed its propulsion system, readying its Draco thrusters for a series of maneuvers over the next day-and-a-half to catch up with the space station. Then the supply ship’s power-generating solar panels extended to a span of more than 54 feet (16.5 meters) to begin charging the spacecraft’s batteries.

The Dragon cargo capsule is packed with 5,097 pounds (2,312 kilograms) of supplies, equipment and research investigations for the station’s six-person Expedition 60 crew.

“There’s dozens of new investigations going up on this flight,” Spetch said. “I can’t wait for it to get there and for them to get started on it.”

The mission is SpaceX’s 18th flight to resupply the space station under a $3.04 billion cargo transportation contract with NASA. First signed in 2008, the deal covers 20 resupply missions.

SpaceX also holds separate multibillion-dollar NASA contracts for additional supply deliveries in the early 2020s, and for the development of the Crew Dragon, or Dragon 2, capsule designed to carry both cargo and astronauts.

The robotic arm will berth the Dragon spacecraft to the Earth-facing port of the space station’s Harmony module. The station crew will open hatches leading to Dragon’s pressurized cabin to begin unpacking the gear inside.

“We’ve got about 5,000 pounds of science, critical spares, food and other items on this flight, also including, externally, the International Docking Adapter No. 3,” Spetch said in a pre-launch press conference. “We’re really looking forward to getting this on there. It’s an important piece of hardware for the future of ISS as it sets the stage for how we are going operate with commercial crew vehicles and our partners in the future.”

The third International Docking Adapter, or IDA-3, will accommodate the Crew Dragon and Starliner commercial crew ferry ships in development by SpaceX and Boeing.

IDA-3 was built by Boeing to replace a unit lost during a SpaceX launch failure in 2015. SpaceX successfully delivered IDA-2 to the station in 2016, and the new docking mechanism was first used in March by SpaceX’s Crew Dragon spacecraft on an unpiloted test flight before officials clear astronauts to ride the vehicle.

NASA said in 2016 it was paying Boeing $9 million to construct the replacement docking adapter using spare parts left over from the first two units.

The space station’s robotic arm will pull IDA-3 out of the Dragon cargo capsule’s unpressurized aft payload bay and place it on the space-facing zenith port of the space station’s Harmony module in mid-August, allowing Boeing’s Starliner and SpaceX’s Crew Dragon capsules to park at the station at the same time, using two separate docking adapters.

“As we rotate crews through the vehicle, we want to have them time to directly hand over face-to-face, so enabling those two docked vehicles is very important,” Spetch said.

The new docking mechanisms are designed for attachment to the station’s space shuttle-era docking ports. The Crew Dragon and Starliner spacecraft employ a different docking system design than the shuttle.

Two astronauts will head outside the station next month to finish up connections between IDA-3 and the Harmony module.

A habitat carrying 40 female mice also launched inside SpaceX’s Dragon spacecraft. The capsule will return to Earth from its month-long mission with 20 of the mice, and specimens from the mice will distributed to medical and biological researchers to investigate how spaceflight affected the animals’ muscles, bones, immune systems and organs.

The other 20 mice will remain on the station to undergo longer exposure to microgravity.

NASA is also flying a spacesuit inside the Dragon cargo craft’s pressurized compartment for use by astronauts on spacewalks.

After a stay of about a month at the space station, the Dragon spacecraft will depart and return to Earth for a parachute-assisted splashdown in the Pacific Ocean, bringing home research specimens for analysis, and another spacesuit for refurbishment.

Here is a breakdown of the cargo aboard the Dragon spacecraft:

Other items slated for delivery to the station inside Dragon’s pressurized compartment include a 3D BioFabrication Facility developed by Techshot, an Indiana-based company, to demonstrate printing soft human tissue in microgravity, a capability researchers view as a stepping stone toward potentially manufacturing organs for transplant patients.

Goodyear Tire and Rubber Co. also has an experiment on the way to the space station. The tire manufacturer will study the formation of silica fillers, a common material used in consumer tires, in the microgravity environment of Earth orbit.

According to Goodyear, knowledge gained from the experiment will help engineers evaluate potential improvements to the silica design process and rubber formulation.

“Goodyear has been a pioneer in tire innovations related to space, with the first and only tires on the moon, numerous projects with NASA and now this,” said Eric Mizner, Goodyear’s director of global materials science, in a press release. “It underscores our passion for going to the ends of the earth — and beyond — to develop new technologies that help us deliver breakthrough products with true consumer benefits.”

Results from the space station experiment may yield improvements in fuel efficiency and other tire performance factors, according to Goodyear.

Japanese scientists also sent up an experiment to grow moss in space, seeking to compare how the plant grows in space with its behavior on Earth. Mosses could be used as a food or oxygen source on future space missions, such as bases on the moon or Mars.

Next up for SpaceX’s team at Cape Canaveral will be the launch of the Amos 17 communications satellite owned by Spacecom Ltd., an Israeli company. The Boeing-built telecom satellite will provide broadband and other communications services over Africa, the Middle East and Europe.

The launch of the Amos 17 mission aboard a Falcon 9 rocket is planned from pad 40 in early August. The most recently confirmed target date for SpaceX’s next launch was Aug. 3, but delays in launching the Dragon cargo ship this week are expected to push back Amos 17’s liftoff.

A United Launch Alliance Atlas 5 rocket is booked on the Air Force-run Eastern Range for blastoff Aug. 8 with a U.S. military communications satellite. That will be followed by the launch of a ULA Delta 4 rocket with a GPS navigation payload Aug. 22. 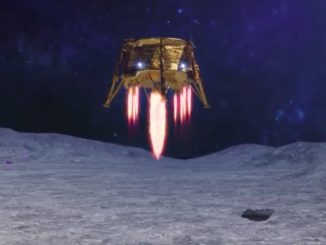 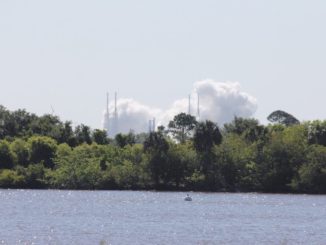 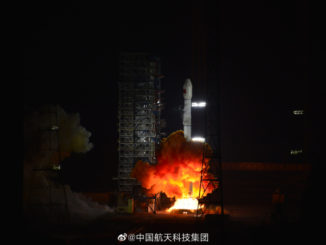