The launch from French Guiana of a solid-fueled Vega rocket with a European-built surveillance satellite for the United Arab Emirates has been postponed, Arianespace said, citing unfavorable high-altitude winds over the spaceport.

Officials have not set a new target launch date.

The fully-assembled rocket was set for liftoff Friday night from French Guiana, but a check of weather conditions showed wind conditions aloft were not favorable for the launch.

As high-altitude winds above the spaceport remain unfavorable, we will not launch (the Vega rocket) today,” Israel tweeted Sunday. “A new target date will be announced as soon as possible based on the evolution of weather conditions. Vega and Falcon Eye 1 remain in a stabilized and safe configuration.”

When the Vega rocket does lift off, launch will occur at 10:53 p.m. local time at the Guiana Space Center, a European-run space base on the northeastern coast of South America.

Falcon Eye 1 is the first of two Falcon Eye reconnaissance satellites ordered by the UAE under an agreement negotiated in 2013. Airbus Defense and Space built the two satellites, and Thales Alenia Space — usually an Airbus competitor — provided the optical imaging payload for each spacecraft under a contract valued at roughly 800 million euros, or about $1.1 billion at 2013 exchange rates.

The agreement was brokered with the backing of the French government, but a security review by the U.S. government delayed the final signature of the contract between the UAE, Airbus and Thales until 2014. The satellites use some U.S.-made components, prompting the Obama administration to put a temporary hold on the deal until officials ultimately approved the export of the U.S. parts for use by the UAE military.

The Falcon Eye satellites are based on the French Pleiades Earth-imaging satellites launched in 2011 and 2012.

The launch will be the 15th flight of a Vega rocket, developed primarily in Italy by Avio, since its debut in February 2012. It will be the sixth launch by Arianespace this year.

After liftoff from French Guiana, the Vega rocket will head north over the Atlantic Ocean and fire its three solid-fueled booster stages in succession during the first six-and-a-half minutes of the mission. A liquid-fueled upper stage will ignite two times to inject Falcon Eye 1 into its targeted near-circular orbit.

Deployment of the Falcon Eye 1 spacecraft is planned for 57 minutes after liftoff. 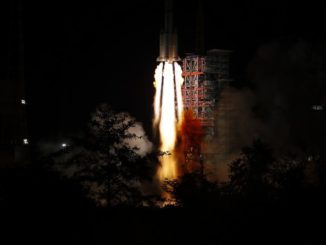 Another Beidou satellite launched by China 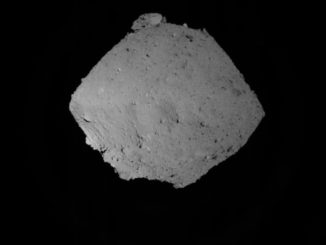