“Launch preparations are underway for New Shepard’s 8th test flight, as we continue our progress toward human spaceflight,” Bezos tweeted.

The reusable New Shepard booster is expected to send Blue Origin’s crew capsule, which will carry research experiments and not passengers on Sunday’s test, to the edge of space, an internationally-recognized boundary around 62 miles (100 kilometers) above Earth. The crew capsule is expected to separate from the rocket once its main engine cuts off, then descend back to the ground under parachutes.

Meanwhile, the New Shepard booster itself will plunge back to Earth before deploying a drag brake, reigniting its hydrogen-fueled BE-3 engine, and extending landing legs for a gentle vertical touchdown on a concrete landing pad.

Blue Origin will webcast the test flight live, and the video will be available on this page.

Sunday’s test flight is expected to reuse the same New Shepard booster that made its first launch in December.

The rocket flown Dec. 13 is Blue Origin’s third New Shepard vehicle. The first New Shepard model was lost on a landing attempt in April 2015, and Blue Origin retired the second unit after it made five successful suborbital hops.

Blue Origin did not provide a live video stream of the Dec. 13 test flight, after conducting live webcasts of the previous two New Shepard demo missions in 2016.

The company hopes to be ready to fly people on New Shepard test flights by the end of the year, followed by the start of commercial space tourism service in 2019.

But Blue Origin is already offering rides for government and commercial research payloads, and more experiments will be aboard the unpiloted crew capsule Sunday.

“These payloads represent a range of users, from NASA’s Johnson Space Center to a small commercial communications firm, as well as our first European customers, funded by the German national space agency, DLR,” Blue Origin said. “Each of the payloads has been outfitted with a custom Blue Origin Payload Locker to provide structural, power, and data interfaces throughout the flight.”

The NASA payload includes sensors to measure the environment — carbon dioxide levels, pressure, acceleration and acoustics — inside the crew capsule’s cabin, and test components for the space agency’s Orion spacecraft. A commercial New Mexico-based communications company named Solstar is flying a tech demo to test the concept of providing Wi-Fi access to in-space users, according to Blue Origin.

The New Shepard suborbital vehicle is a stepping stone to Blue Origin’s larger orbital-class New Glenn rocket, which the company says could make its first test flight from Cape Canaveral by the end of 2020.

Blue Origin engineers are testing a more powerful rocket engine, the BE-4 fed by liquified natural gas, for the New Glenn launcher. The company also hopes to sell BE-4 engines to United Launch Alliance for the next-generation Vulcan rocket. 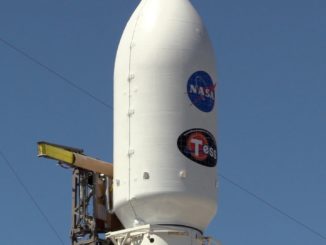 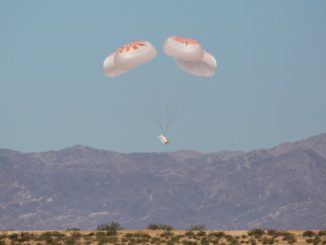