The unpiloted cargo freighter docked with the station’s Zvezda service module at 1038 GMT (5:38 a.m. EST) Thursday as the complex sailed 252 miles (405 kilometers) in altitude east of the Philippines.

A few minutes later, hooks at the docking interface closed to create a firm seal between the Progress MS-08 spaceship and the space station. Cosmonauts Alexander Misurkin and Anton Shkaplerov, who monitored the Progress spacecraft’s approach in case they had to take over manual control, planned to open hatches and begin unloading the supply ship later Thursday.

The docking Thursday came two days after the Progress MS-08 supply ship blasted off from the Baikonur Cosmodrome in Kazakhstan atop a Soyuz-2.1a rocket.

Russian officials originally intended for the refueling and resupply freighter to make an expedited three-and-a-half hour rendezvous with the space station, but a last-minute abort during a countdown Sunday forced engineers to bypass that plan.

Rendezvous profiles by Progress resupply missions and Soyuz crew ferry craft typically run six hours or two days, and Russian officials wanted to demonstrate a quicker approach sequence with Progress MS-08 that could eventually be applied to flights with cosmonauts and astronauts.

But the fast-track three-and-a-half hour rendezvous profile, which would take place over roughly two orbits of the Earth, is only feasible if the vehicle visiting the space station lifts off when the outpost is nearly overhead the launch site. Such an alignment was available Sunday, but the fortuitous orbital mechanics were not duplicated during Tuesday’s launch opportunity.

The Soyuz rocket deployed the Progress supply ship in orbit less than nine minutes after launch Tuesday, and the Russian freighter conducted a series of engine burns to fine-tune its path toward the space station, setting up for Thursday’s final rendezvous guided by the ship’s Kurs radar.

Among the experiments stowed inside the Progress MS-08 spacecraft’s pressurized compartment is an antenna package to track the movements of small animals across the globe.

Called Icarus, the project aims to reveal changes in migratory routes, animal connections and other animal behavior. The antenna delivered to the station Thursday will be installed outside the space station on a spacewalk later this year, and a computer launched on a Russian Progress mission in October will help process the signals coming from tracking units tagged to animals on Earth.

The Progress freighter also carries experimental radiators mounted on the ship’s exterior. The devices will help engineers test the performance of a new thermal control system that could be used on future space missions, according to RussianSpaceWeb.com.

The two-day launch delay — and four-day slip in the Progress’s arrival at the station — pushed back a planned spacewalk by astronauts Mark Vande Hei and Norishige Kanai from Thursday to Friday.

Vande Hei and Kanai will head outside the station on a planned six-and-a-half hour spacewalk to bring in latching end effector, or hand, removed from robotic arm in October for return to Earth on a future SpaceX Dragon spacecraft. The spacewalkers will relocate another end effector replaced last month to a long-term storage position, where it will be available as a spare.

The Progress MS-08 supply ship is slated to remain at the space station until late August, when it will detach and re-enter Earth’s atmosphere, burning up on descent. 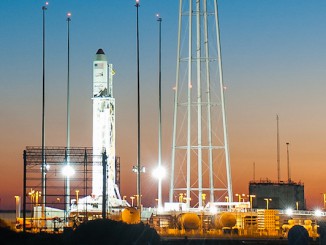 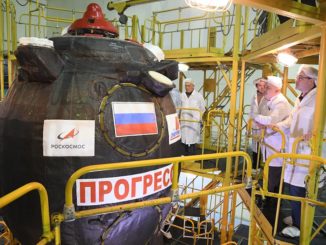 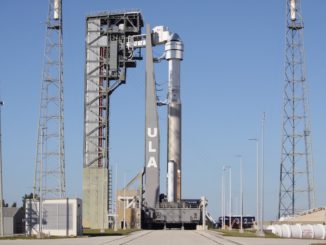