Fresh views from NASA’s New Horizons spacecraft released Thursday reveal diverse landscapes on Pluto, possible dune fields, mysterious channels, and nitrogen ice flows in greater detail than ever before, but it is just the tip of the iceberg as data from the far-flung probe resumes streaming back to Earth.

Parts of the dwarf planet appear to show jumbled mountainous features — a type of topography scientists call “chaos terrain” — at the edge of a vast ice field the size of Texas informally named Sputnik Planum. The discovery bears similarities to Jupiter’s icy moon Europa, which is encrusted in a global ice sheet likely covering a liquid water ocean.

“The surface of Pluto is every bit as complex as that of Mars,” said Jeff Moore, leader of the New Horizons geology, geophysics and imaging team at NASA’s Ames Research Center in Moffett Field, California. “The randomly jumbled mountains might be huge blocks of hard water ice floating within a vast, denser, softer deposit of frozen nitrogen within the region informally named Sputnik Planum.”

Liquid water cannot exist at Pluto’s frigid temperatures, according to scientists, but there may be a subsurface sea of liquid nitrogen lurking beneath Sputnik Planum’s icy veneer.

“New images also show the most heavily cratered — and thus oldest — terrain yet seen by New Horizons on Pluto next to the youngest, most crater-free icy plains,” NASA said in a press release. “There might even be a field of dark wind-blown dunes, among other possibilities.”

Imagery from New Horizons show an area of mysterious closely-aligned ridges, which appear the way sand dunes on Earth look from space.

“Seeing dunes on Pluto — if that is what they are — would be completely wild, because Pluto’s atmosphere today is so thin,” said William McKinnon, deputy lead of the mission’s geology, geophysics and imaging team from Washington University in St. Louis. “Either Pluto had a thicker atmosphere in the past, or some process we haven’t figured out is at work. It’s a head-scratcher.”

The latest pictures also show Pluto’s atmosphere is complex, NASA said, with many more haze layers than realized. Turning up the contrast in images obtained from Pluto’s night side show the haze creating a soft dusky glow over dark landscapes, illuminating regions scientists did not expect to see.

“Pluto is showing us a diversity of landforms and complexity of processes that rival anything we’ve seen in the solar system,” said Alan Stern, principal investigator for the New Horizons missions from the Southwest Research Institute of Boulder, Colorado. “If an artist had painted this Pluto before our flyby, I probably would have called it over the top — but that’s what is actually there.”

Nearly two months after its July 14 encounter with Pluto, New Horizons resumed beaming back images stored on the spacecraft’s data recorders Sept. 5 after a hiatus to focus in returning other datasets. The latest images double the area of Pluto pictured at 1,300-foot (400-meter) resolution, according to NASA.

The new downlinks include full image files to improve on the compressed versions sent back immediately after the July 14 flyby, which took New Horizons within 7,800 miles (12,500 kilometers) from Pluto.

Images still to be broadcast from New Horizons include the sharpest photos from the flyby, and pictures to fill out a global mosaic at higher resolution than views released before now. Color imagery and composition data are also due to come back to Earth, but it will take until late 2016 for all the information to make it home.

The transmission rate is just 2 kilobits per second at New Horizons’ distance more than 3 billion miles from Earth.

Scientists plan to release new raw images of Pluto’s moon Charon and its tiny satellites Nix and Hydra on Friday. 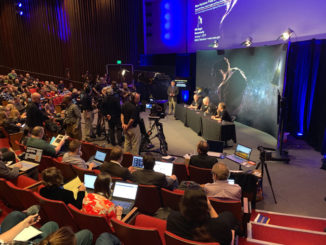 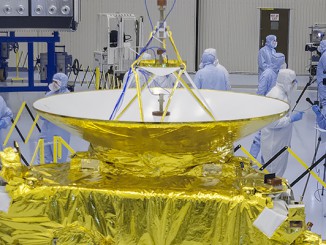 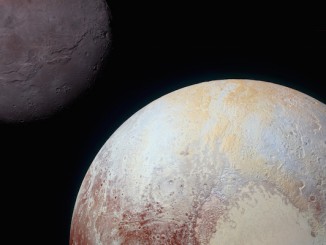