Three space station crewmen strapped inside a Russian Soyuz spacecraft and relocated the landing capsule Friday, clearing a docking port for the arrival of a new crew next week.

Under the command of veteran Russian cosmonaut Gennady Padalka, the Soyuz TMA-16M spacecraft undocked from the space station’s Poisk module at 0712 GMT (3:12 a.m. EDT) as the complex sailed 249 miles above Nigeria.

Joined by flight engineer Mikhail Kornienko and NASA astronaut Scott Kelly, Padalka flew Soyuz ferry craft about 150 feet (45 meters) from Poisk docking module. The Soyuz fired rocket thrusters to swing toward the aft docking port of the station’s Zvezda service module, then it lined up to park at the new location.

“Everything is nominal, Moscow,” Padalka radioed. “Nothing to it. We have a great visual on the service module.”

Padalka fired a pulse to start the final approach to the Zvezda service module, then guided the solar-powered space capsule into a docking cone at 0730 GMT (3:30 a.m. EDT) as the outpost flew over northern Kazakhstan.

“Target is dead center, the vehicle is moving in a very stable fashion,” Padalka said. “Standing by for contact, and contact is confirmed.”

A docking probe retracted to bring the two vehicles together a few minutes later, then hooks closed to create a firm connection with the space station. Padalka, Kornienko and Kelly planned to enter the space station and rejoin the other three members of the Expedition 44 crew later Friday.

The three-man crew relocated the Soyuz capsule with their launch and entry spacesuits, just in case a problem re-docking the spacecraft forced the trio to return to Earth. All three boarded the Soyuz for the move because the capsule serves as their escape pod in the event of an emergency.

The relocation opens up the space-facing Poisk module for the arrival of the Soyuz TMA-18M crew capsule Sept. 4 with an international crew from Russia, Denmark and Kazakhstan. Station managers prefer to keep the Zvezda aft port now temporarily occupied by the Soyuz open for Progress cargo freighters, which refuel the service module.

Commanded by Sergey Volkov, the fresh Soyuz will blast off at 0437 GMT (12:37 a.m. EDT) Sept. 2 from the Baikonur Cosmodrome for a two-day trip to the space station.

Russian officials decided to forgo a six-hour rendezvous profile because the space station’s orbit is too high following a recent maneuver to move out of the way of space debris.

With the docking of the Soyuz TMA-18M crew, the space station will temporarily hold nine crew members, an international staff including representatives from Russia, the United States, Japan, Denmark and Kazakhstan.

Mogensen and Aimbetov will join Padalka on the Soyuz TMA-16M space capsule for a parachute-assisted landing in Kazakhstan on Sept. 11, and Volkov will remain aboard the space station for a six-month tour of duty before returning home in March 2016 with Kelly and Kornienko.

The logistics of next week’s crew handover allows Kelly and Kornienko to complete nearly one year on the space station and maintains the Soyuz lifeboats at the complex, which would be used to evacuate the residents in an emergency.

The Soyuz TMA-16M capsule moved during Friday’s relocation maneuver launched in March and is nearing the end of its design life, necessitating its return to Earth next month. 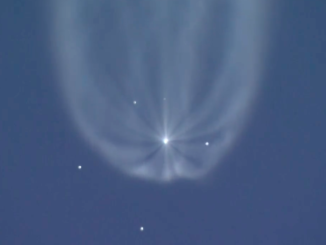 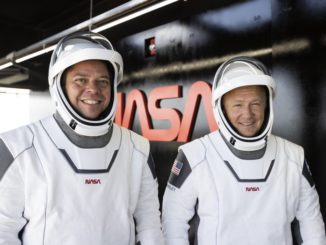 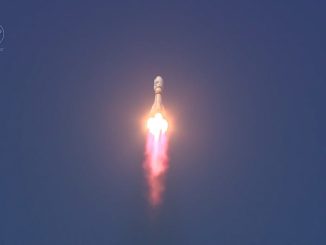