The mission is in addition to the United Launch Alliance Atlas 5 already scheduled for Dec. 3 from Cape Canaveral to launch a Cygnus freighter with nearly four tons of supplies to the station.

The new launch, which could come as early as March, was booked on the powerful Atlas 5 “in order to provide NASA with the maximum cargo load Cygnus can carry,” Orbital ATK said in a press release.

Orbital ATK bought these rides on Atlas in the wake of last October’s dramatic explosion of its own Antares rocket with the third operational Cygnus resupply mission to the station.

Orbital ATK is in the process of changing the main propulsion system on the Antares away from Soviet-era NK-33 engines left over from the failed moon program to modern Russian RD-181 powerplants.

Antares is expected to resume launches of Cygnus craft next year.

“Our team and our partners are devoting maximum efforts to ensuring the success of NASA’s ISS commercial cargo program,” said David W. Thompson, President and Chief Executive Officer of Orbital ATK. “We are committed to meeting all CRS mission requirements, and we are prepared to continue to supply the Space Station.”

The Dec. 3 Atlas will launch the fourth operational Cygnus loaded with cargo to be used by the station’s resident crews. The craft will reach the station for berthing by the outpost’s robotic arm on Dec. 6.

The first piece of that Cygnus arrived Monday night at Kennedy Space Center’s sprawling Space Station Processing Facility where modules, the trusses and payloads were readied for launch during the space shuttle program.

Delivered was the Italian-built pressurized cargo hold of Cygnus produced by Thales Alenia Space. The Orbital ATK-made service module section of the craft, with the propulsion and power systems, is expected in October.

It will mark the first flight of the enhanced Cygnus with a lengthened cargo module and circular solar wings.

Once the two sections of Cygnus are mated together, the completed vehicle will be moved to KSC’s Payload Hazardous Servicing Facility for fueling. The late-stow of cargo two weeks before launch and encapsulation in the rocket’s nose cone will be performed at the PHSF before Cygnus is taken to the Atlas 5 rocket’s assembly building for attachment.

The Atlas 5 rockets with Cygnus will fly in its frequently used 401 configuration with a 14-foot-diameter aluminum nose cone encapsulating Cygnus, no strap-on boosters and a single engine Centaur upper stage.

They will be powered off the launch pad on 860,000 pounds of thrust from the kerosene-fueled RD-180 main engine. The Centaur is equipped with a hydrogen-fed RL10C-1 cryogenic engine.

The new launch is the second commercial Atlas 5 mission to be announced in a week, following EchoStar 19’s booking last Wednesday.

The rocket is scheduled to perform five commercial launches in a year-long span starting with the Mexican Morelos 3 communications satellite this October, the two Cygnus flights, the WorldView 4 Earth-imaging satellite and the EchoStar 19 broadband Internet spacecraft in late 2016.

The Atlas 5, an Evolved Expendable Launch Vehicle, has flown 55 times since its debut in August 2002. 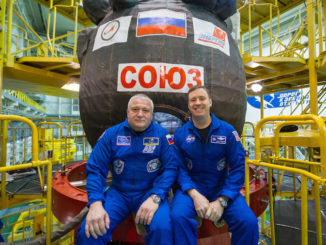 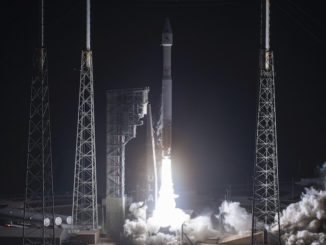 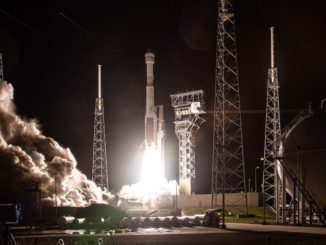