Last week’s successful launch of a Vega rocket with a European re-entry technology demonstrator marked the first of at least 11 flights planned this year by Arianespace to put communications satellites, Earth observatories and research probes into space.

Arianespace is holding out hope for up to a dozen flights if payloads are ready on time and scheduling at the Guiana Space Center — Europe’s spaceport in French Guiana — permits.

“The target is, on average, one launch per month,” said Stephane Israel, Arianespace’s chairman and CEO.

The mix on Arianespace’s launch manifest this year includes six or seven Ariane 5 flights — each carrying two satellites — two or three launches of the Russian-made Soyuz rocket, and three missions using the lightweight Vega rocket, including the Feb. 11 launch already in the books.

The Soyuz and Vega rocket missions will all be for institutional customers — either the European Space Agency or the European Commission — while the launches of the heavy-lift Ariane 5 will primarily serve the commercial market.

Arianespace achieved 11 launches in 2014. One of the missions — a Soyuz launch — put two of Europe’s Galileo navigation satellites in the wrong orbit, but officials expect the spacecraft can be salvaged to perform at least a partial mission.

After the Feb. 11 Vega launch of ESA’s experimental space plane, the next flight on Arianespace’s schedule is set for liftoff March 26, when a Soyuz rocket and Fregat upper stage will send up two satellites for Europe’s Galileo navigation network.

The first Soyuz flight of the year from French Guiana’s tropical spaceport is also the first launch of Galileo positioning satellites since a Fregat upper stage put two identical navigation spacecraft in the wrong orbit in August 2014.

Officials say they identified the cause of the failure — a frozen fuel line — and reworked Fregat upper stages have successfully flown since the mishap.

Europe’s Ariane 5 rocket will make its first liftoff of 2015 on April 15 with the Thor 7 and Sicral 7 communications satellites.

Thor 7 will provide high-throughput Ka-band broadband services for the offshore sector in the North Sea, the Norwegian Sea, the Red Sea, the Baltic Sea, the Persian Gulf and the Mediterranean for Norway’s Telenor Satellite Broadcasting. Sicral 2 carries communications payloads for Italian and French military authorities.

Another Ariane 5 mission is due to follow on May 20 with a pair of satellites for DirecTV and one of its subsidiaries.

DirecTV 15 — a sister satellite to a spacecraft launched on an Ariane 5 in December 2014 — will provide direct-to-home television broadcasts across the United States. Sky Mexico 1 will beam direct television programming to Mexico, Central America and the Caribbean for a broadcast company owned by Televisa, a leading Mexican media business, and DirecTV.

The second Vega launch of the year is scheduled for June 11 with Sentinel 2A, the second satellite to be launched for the European Commission’s Copernicus Earth observation program. Sentinel 2A carries an optical imaging payload for land observation, gathering data complementary to the U.S. Landsat satellites.

An Ariane 5 flight will come next in late June or early July with the launch of Europe’s MSG 4 geostationary weather satellite, the final spacecraft in the second generation of Meteosat observatories. MSG 4 will accompany a commercial communications satellite on the same Ariane 5 launch, but Arianespace has not confirmed the identity of the co-passenger.

The order of launches for the rest of 2015 is still to be finalized.

Arianespace’s tandem launches with the Ariane 5 rocket sometimes require shuffling to pair up satellites appropriately sized for the upper and lower berths inside the launcher’s paylaod fairing.

Satellites for the upper position are typically around 6 metric tons in mass, and spacecraft assigned to the lower spot are usually between 3 and 4 metric tons.

Communications spacecraft expected to launch on the Ariane 5 rocket before the end of the year include:

The Star One C4, Eutelsat 8 West B, NBN Co 1A, Arabsat 6B and EchoStar 18 satellites are sized for launch in the Ariane 5’s upper berth. The other satellites will fit into the lower position in Ariane 5 launcher’s Sylda dual-payload adapter.

Two Intelsat communications satellites and a Japanese satellite to relay communications among military forces may also be ready for launch by the end of 2015, according to statements by the spacecraft’s owners.

Arianespace’s challenge is matching a big satellite and a smaller payload that are ready for launch at the same time. The powerful Ariane 5 is unable to lift two satellites over 5 metric tons — about 11,000 pounds — into geostationary transfer orbit, and pairing two lighter spacecraft on the same launch is not good for business.

“If we do that, we lose a lot of money,” Israel said. “We need one small and one big satellite.”

The launch provider won nine contracts for geostationary satellites in 2014, and eight of them are the right size to ride in the Ariane 5’s lower berth, Israel said in an interview with Spaceflight Now.

SpaceX has emerged as the chief rival to the veteran French-based launch company, which started the commercial launch business when it was founded in 1980. SpaceX and Arianespace cinched the same number of commercial launch contracts last year.

Partly in response to SpaceX’s bargain prices and partly as an initiative to ensure the Ariane 5 has a steady balance of heavier and lighter payloads, Arianespace cut prices for customers with smaller satellites.

“As a result, we have been very successful,” Israel said. “We captured eight of these (small) satellites out of the 13 on the market. Our policy has been fully successful, allowing us to rebalance our order book for Ariane. It was the right thing to do.”

Up to two more Soyuz rocket launches from French Guiana are on tap for the second half of 2015, both with pairs of Galileo navigation satellites.

In September, the third and final Vega flight of the year will deploy ESA’s LISA Pathfinder probe on a journey to the L1 Lagrange point a million miles from Earth in line with the sun. The three flights of Europe’s Vega rocket, the newcomer to the Arianespace launcher family, marks the most in a calendar year since the booster debuted in 2012.

LISA Pathfinder will test the concept of gravitational wave detection at the L1 point, a precursor to better understanding a key tenet of Einstein’s theory of general relativity.

Arianespace’s goals for the year in the marketing side of its business include attracting a more even mix of Ariane 5 contracts for heavy and small satellites, Israel told Spaceflight Now.

“In 2014, we captured one big satellite,” Israel said. “We were not in competition for all big satellites because we have limited slots up to the end of 2017 … We think we will have a more balanced order intake in 2015 between small and big satellites.”

Arianespace says it has enough contracts in its backlog for three years of launches, with an order book valued at 4.1 billion euros, or approximately $4.7 billion at current exchange rates.

As of January, the backlog included 22 launches of the Ariane 5 rocket — 18 flights to geostationary transfer orbit and four missions to place Galileo navigation satellites in space. Six Soyuz launches and nine flights of the Vega rocket also have confirmed payloads, Arianespace said in a press release.

Israel said the new Ariane 6 rocket approved by European governments in December will solve the problem of dual-payload manifesting. 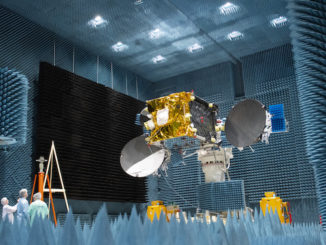 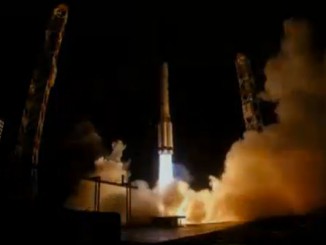 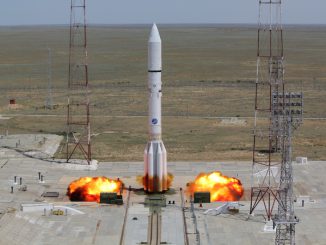