Weather forecasters will watch for isolated rain showers and gusty winds that could delay Thursday’s launch of a Delta 4-Heavy rocket carrying NASA’s Orion space capsule on its first flight into orbit.

“Gusty easterly winds will persist this week over the Florida East Coast,” the Air Force weather team wrote in a forecast summary. “Low level moisture will cause low clouds and occasional coastal showers to move in from offshore all week, particularly during the morning hours.”

The rain showers are not expected to contain lightning, but officials say there is a chance the weather Thursday could violate the Delta 4 rocket’s rules on ground winds and flight through precipitation.

Meteorologists predict broken cloud decks at 3,000 feet and 30,000 feet during Thursday’s launch window. Winds are forecast to be out of the northeast gusting up to 17 mph, and the temperature should be around 72 degrees Fahrenheit.

The Orion team is also receiving updates solar activity and on weather and sea conditions at the capsule’s splashdown zone in the Pacific Ocean about 600 miles southwest of San Diego, where U.S. Navy and NASA recovery personnel will greet the spacecraft.

The United Launch Alliance Delta 4-Heavy rocket — the most powerful launcher in the U.S. inventory — will send the Orion spacecraft more than 3,600 miles above Earth to test the capsule’s computers, avionics, software and control systems.

The 19,000-pound capsule — shielded from re-entry temperatures near 4,000 degrees Fahrenheit — will plunge back into the atmosphere flying west to east over the Pacific Ocean, then deploy parachutes to slow its descent for a gentle splashdown about four-and-a-half hours after launch.

Thursday’s launch marks the first space mission for the Orion spacecraft, which will carry astronauts on subsequent flights beyond Earth orbit, reaching potential destinations like asteroids, the moon, Mars and deep space habitats. Another unmanned test flight is planned for 2018, and Orion’s first crewed mission is scheduled for 2021. 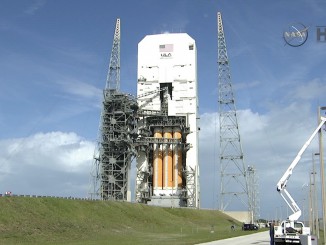 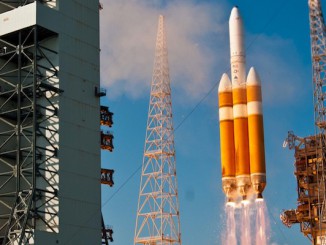 Previous flights of the Delta 4-Heavy 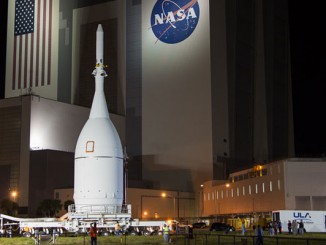