The first of the six Dream Chaser resupply missions to the space station is set for launch in late 2021 from Cape Canaveral on the second flight of ULA’s Vulcan Centaur rocket, which is scheduled to debut earlier that year.

“This is a very competitive launch market nowadays, and to be selected by SNC to fly this block of missions on our Vulcan launch vehicle is just a tremendous honor, and we are very grateful,” said Tory Bruno, ULA’s chief executive, in a press conference Wednesday at Sierra Nevada’s Space Systems division headquarters in Louisville, Colorado.

Sierra Nevada previously contracted with ULA for two Dream Chaser launches on Atlas 5 rockets. Those two launch reservations have been converted to Vulcan missions, and an additional four Dream Chaser missions are now reserved to fly on the Vulcan Centaur rocket.

The long relationship between the companies was a key factor in Sierra Nevada’s decision to secure additional launches with ULA, Sierra Nevada officials said.

“I think ULA had a pretty significant advantage because we had been working with ULA from day one,” said Eren Ozmen, owner and president of SNC. “Not to mention that we had a really competitive price.”

“We had five different launch providers that we worked (with) very closely, in Japan and Europe, and also obviously Elon Musk (SpaceX) and Jeff Bezos (Blue Origin),” Ozmen said. “They were all part of our selection criteria. They all had really good capabilities.

“At the end of the day, it was just really both our personal relationships and the capabilities and the competitive price, (so) ULA got the contract,” she said.

“Track record is important,” said Fatih Ozmen, SNC’s owner and CEO. “(ULA has a) flawless track record so far on Atlas 5, and that culture is very telling for what can come in the future, so that was a big factor as well.”

Sierra Nevada and ULA did not disclose financial terms of the contract, but officials said ULA’s Atlas 5 rocket will remain available as a backup option to launch Dream Chaser missions in case the Vulcan’s development encounters delays.

“We’re on time with Vulcan, but if something should arise, we’re going to make sure that you fly when you’re ready,” Bruno said in Wednesday’s press conference alongside Sierra Nevada officials.

The first Vulcan launch is scheduled for early 2021. Bruno previously said ULA aims to find a commercial customer for the inaugural Vulcan flight, but the launch provider has not announced a contract for the Vulcan’s first launch.

“All of the major elements of Vulcan, its payload fairing, its solid rocket motors, its avionics, its software, are going to be feathered in on Atlas flights between now and then, so that by the time we actually fly (Vulcan), everything but the first stage engine — the new BE-4 — will have actually been flown several times,” Bruno said.

Two BE-4 engines, built by Blue Origin, will power each Vulcan first stage. The BE-4 engine burns methane and liquid oxygen, and has not flown yet.

The lifting body Dream Chaser spaceship is designed to take off on top of a conventional rocket and land in a runway like the space shuttle. The reusable commercial cargo vehicle can deliver around 12,100 pounds (5,500 kilograms) of scientific experiments, hardware and crew supplies to the space station on each unpiloted mission.

“Dream Chaser is really challenging the status quo … because it is the only privately-owned commercial spaceplane in the world that exists that is runway landing-capable and reusable,” said Fatih Ozmen, SNC’s owner and CEO.

The Dream Chaser will will max out at approximately 20 tons when fully fueled at launch. The 30-foot-long (9-meter) spacecraft — about a quarter the length of a space shuttle orbiter — will launch inside the Vulcan rocket’s nose fairing, with wings and solar panels folded up to fit inside the Vulcan payload envelope.

SpaceX and Northrop Grumman’s Dragon and Cygnus supply ships are based on capsule designs. SpaceX’s Dragon returns cargo to Earth with parachute-assisted splashdowns at sea, while the Cygnus spacecraft serves as a trash disposal vehicle and breaks up in the atmosphere at the end of each mission.

Originally designed for astronauts, the spaceplane will return roughly 4,000 pounds (1,850 kilograms) of cargo to Earth with a runway landing, following a re-entry profile that is more gentle than the steeper returns of capsule vehicles. Sierra Nevada’s six CRS-2 missions returning from the space station will touch down at NASA’s Shuttle Landing Facility at the Kennedy Space Center in Florida, a few miles from ULA’s Vulcan launch pad.

A separate pressurized module, designed to burn up during re-entry, will also accommodate up to 7,400 pounds (3,400 kilograms) of cargo for disposal. The cargo module will jettison from the Dream Chaser spaceplane before re-entering the atmosphere.

The primary structure of the first orbit-ready Dream Chaser spaceplane will soon be delivered to SNC’s Louisville facility for final assembly. Curry said the delivery of the airframe from Lockheed Martin, which constructed the structure at its Fort Worth aircraft factory, is expected “in the next month or so.”

The cargo module that will mount to the rear of the Dream Chaser spaceplane is also nearing completion. That element is built by Applied Composites in San Diego, Curry said.

The Dream Chaser’s rocket thrusters are also undergoing tests. The spaceplane’s propulsion system will consist of 26 engines capable of firing at three different thrust settings to control the ship’s attitude and adjust its orbit 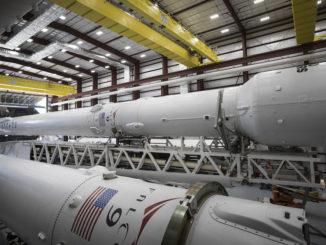 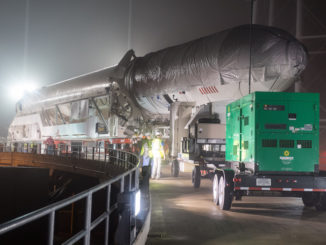 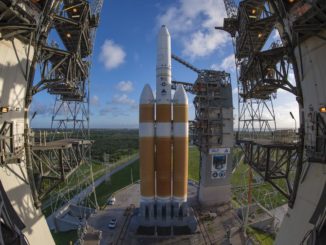