Confident in technical and procedural fixes implemented since a botched launch in August left two Galileo satellites in the wrong orbit, officials in charge of the European navigation system say Friday’s liftoff of two identical spacecraft on a Soyuz rocket will attempt to fill the same slots within the fleet as targeted by last year’s failed mission.

The spacecraft poised for liftoff Friday are the seventh and eighth operational platforms to join Europe’s Galileo navigation network, a civilian-run counterpart to the U.S. military’s Global Positioning System and the Russian Glonass satellite fleet.

Galileo’s deployment has not been without difficulty — two satellites were released into an off-target orbit by a Fregat rocket stage last year — but officials said Friday the production of new spacecraft is going smoothly enough to have enough Galileo navigation stations in orbit to support limited services next year.

Investigators blamed last year’s Aug. 22 launch mishap on a design flaw in the Russian-made Fregat stage, which is responsible for maneuvering the Galileo satellites to their final orbits high above Earth after the three-stage Soyuz rocket finishes its job of boosting the payloads out of Earth’s atmosphere.

Didier Faivre, director of navigation at the European Space Agency, told reporters Friday that launcher authorities in Russia and with Arianespace — the French company with overall responsibility for the launch — have resolved the problem.

“Today, we have two satellites on top of Soyuz and Fregat, and this is because we are confident,” Faivre said in a conference call with reporters from the launch base in Kourou, French Guiana.

Engineers concluded hydrazine fuel for attitude control thrusters on the Fregat stage during the August launch froze inside feed lines, rendering the rocket unable to point in the right direction for a critical engine burn to put the Galileo satellites in their planned circular orbit.

The result was an orbit with a high point, or apogee, above the target altitude and a low point, or perigee, below the planned figure. Several months of unplanned maneuvers with each satellite’s on-board propulsion system made their orbits more circular, but still ended up short of the round orbit used by other Galileo navigation stations.

Faivre said the salvage operation will allow the satellites to become fully functional members of the Galileo fleet. The program’s ground operations systems will need reprogramming — at a cost of less than 10 million euros ($10.8 million) — to accommodate the satellites circling Earth in an irregular orbit.

“We have now defined what has to be done,” Faivre said. “We have demonstrated with test tools that it works. We have to wait now for the operational constellation. It takes several months and costs a few million (euros), but that is nothing compared to the replacement of the satellites.

“For the majority of the users, these satellites should be considered as just another part of the constellation,” Faivre said.

The fixes instituted after the Aug. 22 launch failure included routing the hydrazine lines away from the Fregat’s super-cold helium pressurization system to remove the risk of freezing.

The European Commission, which manages the Galileo program, self-insured the satellites launched in August. The practice is typical for most government space missions in Europe and the United States.

Faivre said the program will procure insurance coverage for future Galileo satellites, beginning with the next mission later this year.

“Every launch is very important,” Faivre said. “This one, of course, is a different color because it’s a launch after an anomaly.”

The two satellites buttoned up for blastoff Friday will aim for the same location — Plane B — within the Galileo system as the launch in August, according to Faivre.

Galileo satellites will eventually fill three orbital pathways tilted at an angle of 55 degrees to the equator. Each plane will have 10 satellites when the constellation’s deployment is complete.

“Beyond the emotion and the fact that we recovered from an anomaly, I hope this launch marks the beginning of the full deployment phase,” Faivre said. “We have now a clear objective to have 30 satellites in orbit by 2020.

“This was the objective last time,” Faivre said. “We had to manage a difficult situation, but this launch hopefully will mark this beginning of the deployment.”

Friday’s launch will carry up the seventh and eighth Galileo satellites, and the third and fourth members of the program’s Full Operational Capability phase. The European Commission has ordered 22 FOC satellites from OHB of Bremen, Germany.

Surrey Satellite Technology Ltd. of the United Kingdom supplies the L-band navigation payloads for the satellites.

Four satellites supplied by a separate industrial consortium launched in 2011 and 2012 to validate the operability of the Galileo system. The test spacecraft are now considered full-fledged members of the Galileo fleet, despite an issue with a navigation antenna on one of the satellites.

“This will (have) some consequences that will be applied in the future for these kind of navigation antennas, not only for Galileo but for other missions,” said Javier Benedicto, ESA’s Galileo program manager.

Benedicto said the other three In-Orbit Validation, or IOV, satellites are susceptible to the same glitch, and engineers are working on a software patch to allow ground controllers to identify the problem early if it appears on another spacecraft, potentially minimizing its effect.

After Friday’s liftoff, 18 Galileo satellites under contract remain to launch. Faivre said Galileo officials plan to purchase more spacecraft — either four or six — this year or next year to launch the entire 30-satellite fleet by 2020.

Faivre said production of Galileo satellites by OHB is proceeding apace. Crews then ship the satellites to ESA’s test center in the Netherlands for checks, before transporting them across the Atlantic Ocean to the Guiana Space Center.

Two more Galileo satellites are due for liftoff in September on a Soyuz rocket, followed by another Soyuz launch with a pair of navigation payloads at the end of 2015 or the beginning of 2016.

The first of at least three Galileo launches aboard larger Ariane 5 rockets could take off in 2016, Faivre said. The Ariane 5 can take up four satellites at a time.

When complete, the 30-satellite constellation — 24 active platforms and six spares — will beam navigation signals to users around the world. New receivers can accept data from GPS and Galileo satellites, offering members of the public improved accuracy in positioning and timing as the number of spacecraft in the sky grows.

Managed by the European Commission with technical support from ESA, the 5.4-billion euro ($5.8 billion) Galileo system is billed as an independent network operated by civilians. The GPS satellites are owned by the U.S. Air Force and access to navigation data could be restricted in times of war or crisis.

European officials do not sell the Galileo system — one of Europe’s most costly space programs ever — as a rival to the American GPS network. The Galileo system is designed to be interoperable with GPS and Russia’s Glonass navigation satellites. 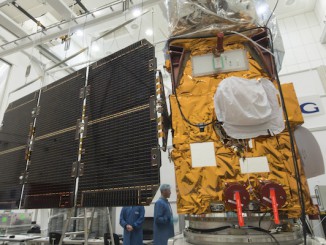 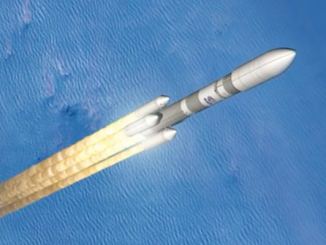 France to privatize its Arianespace shares 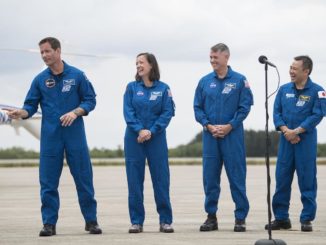