CAPE CANAVERAL — Two probes joined an identical pair near their Florida launch site today for liftoff aboard an Atlas 5 rocket in March to study magnetic field explosions in space.

Together, the quartet is NASA’s Magnetospheric Multiscale mission, or MMS. Launch is slated for March 12.

The spacecraft will fly in a tetrahedron formation, coming within 6 miles of each other, while looping around Earth to image “magnetic reconnections” or explosions in the magnetic field.

“The formation flying,” says Brent Robertson, MMS deputy project manager at NASA-Goddard, “is just as hard as going to Mars, in what we are doing in controlling this formation.

“We start out at 100 km (62 miles) apart per spacecraft and bring them in to 10 km (6 miles) apart. We have to have very precise maneuvers to do that with a spinning spacecraft. It is quite challenging.”

MMS will fly in an elliptical orbit of 1,600 miles altitude at its closest approach to Earth and extend out to 43,500 miles at its farthest. Later in the mission, the high point will be boosted to 95,000 miles.

“We fly through the region of interest every day and we want to have a good formation of the four spacecraft,” said Robertson.

Arriving Oct. 29 was spacecraft “mini-stack No. 1,” consisting of two of the four satellites. “Mini-stack No. 2,” arrived today. They were shipped by truck from NASA’s Goddard Space Flight Center in Maryland.

The identical spacecraft, fitted with 11 instruments made of 25 sensors, are being readied at the commercial Astrotech payload processing campus in Titusville, Florida.

Extensive final testing, fueling, stacking, uncovering 100 sensors and finally encapsulation in the rocket’s nose cone will be completed at Astrotech in the coming months. The spacecraft stack will be transported to the Atlas launch complex about 10 days before liftoff.

It will be the second Atlas 5 launch of the new year, with liftoff planned for 10:44 p.m. EST on March 12. The rocket will be flying in the 421 configuration with a four-meter-diameter nose cone, two strap-on solid-fuel boosters and a single-engine Centaur upper stage.

“There was a Decadal Survey done and MMS was deemed a high priority to understand the physical process known as magnetic reconnection. This process occurs throughout the universe. It occurs when solar flares erupt from the sun, it occurs in planet formation and it occurs here on Earth in fusion reactors,” Robertson said.

“The best place to study magnetic reconnection is where we are going — in Earth’s magnetosphere — to understand why it happens and how it happens. (MMS) is basically a research mission to understand this process,” said Robertson. 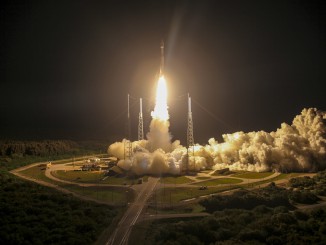 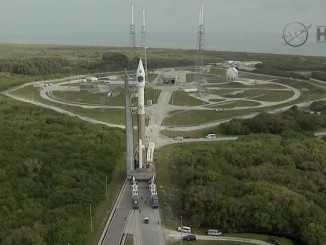 Atlas 5 rolled to the pad for Thursday night’s liftoff 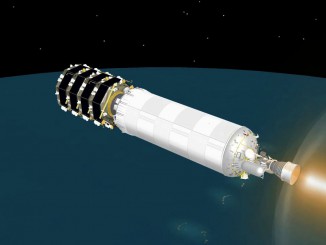