A NASA spacecraft that will fly closer to the sun than any mission before will launch on a Delta 4-Heavy rocket in 2018, requiring a boost from the largest active launcher in the U.S. inventory and repeated flybys around Venus to reach an operating post inside the solar atmosphere.

As expected, NASA announced its selection of the United Launch Alliance Delta 4-Heavy rocket to dispatch the Solar Probe Plus mission from Earth. Liftoff from Cape Canaveral is set for July 31, 2018, at the opening of a 20-day launch window, NASA said in a press release.

The launch contract’s value is $389.1 million, according to NASA.

“The ULA team is very proud that NASA has selected the Delta 4-Heavy launch vehicle for this extraordinary science mission,” said Jim Sponnick, ULA vice president for Atlas and Delta programs, in a ULA press release. “The Delta 4-Heavy rocket is uniquely qualified to provide the launch service for this vital science mission that will help us understand processes near the surface of the sun that affect space weather and radiation environments. We look forward to successfully delivering this critical spacecraft to orbit for NASA.”

A Star 48 solid-fueled third stage supplied by Orbital ATK will help propel Solar Probe Plus away from Earth.

“ULA has considerable successful experience integrating third stages on top of our already capable vehicles,” Sponnick said in a statement. “We did something very similar when we launched the New Horizons mission, which will fly by Pluto and its moons later this year. We are proud to have Orbital ATK as our teammate for the development of the third stage for the SPP mission.”

NASA initially planned to launch the Solar Probe Plus mission aboard an Atlas 5 rocket. But not even the Atlas 5’s most powerful configuration — with five solid rocket boosters — could do the job, NASA officials said last year.

That left the Delta 4-Heavy rocket as the only active U.S. launcher capable of sending Solar Probe Plus toward the sun. NASA kept open the possibility of using SpaceX’s Falcon Heavy rocket for the launch.

But the Falcon Heavy is still in development with a first test launch planned later this year. At least three Falcon Heavy launches are required before the new heavy-lifter achieves certification to blast NASA’s most costly missions into space.

SpaceX did not confirm whether it bid on the Solar Probe Plus launch, but ULA said in a press release that NASA’s selection of the Delta 4-Heavy “resulted from a competitive procurement that considered multiple launch providers.”

Even after launching on the Delta 4-Heavy rocket — and getting a push from the Star 48 third stage motor — the 1,350-pound Solar Probe Plus spacecraft will still need help to reach the mission’s final operating post, culminating with three close-up passes within 3.8 million miles of the sun.

Solar Probe Plus will orbit the sun 24 times in its seven-year mission. Seven flybys of Venus are planned from 2018 through 2024 to reshape the spacecraft’s orbit through the inner solar system, moving Solar Probe Plus to its closest point to the sun in December 2024.

Solar Probe Plus will fly 10 times closer to the sun than the planet Mercury, whizzing above the sun at speeds of 125 miles per second. A 4.5-inch thick carbon-composite heat shield will protect the probe’s sensitive instrumentation and electronics from temperatures up to 2,500 degrees Fahrenheit.

Funded by NASA and led by the Johns Hopkins University Applied Physics Laboratory, the mission aims to find the source of the sun’s solar wind, a supersonic outflow of plasma that permeates throughout the solar system. Solar Probe Plus will also study what makes the sun’s corona, or outer atmosphere, much hotter than the star’s surface.

“The answers to these questions can be obtained only through in-situ measurements of the solar wind down in the corona,” said Nicky Fox, Solar Probe Plus project scientist at APL. “Solar Probe Plus gets close enough to provide the missing links, with the right complement of instruments to make the measurements. For the first time, we will be able to go up and touch our star.”

NASA has budgeted about $1.5 billion to build and launch the Solar Probe Plus mission.

The Solar Probe Plus launch contract gives ULA a backlog of 14 Delta 4 missions through 2020.

Five of those launches are with the Delta 4-Heavy, which is made by bolting three Delta 4 rocket boosters together. The three first stage cores are powered by hydrogen-burning RS-68 engines, and a second stage RL10 engine will complete the Delta 4’s launch sequence, giving way to the solid-fueled Star 48 upper stage motor.

ULA chief executive Tory Bruno has announced the company plans to retire the Delta 4 rocket by the end of the decade. The Delta 4-Heavy version would keep flying until SpaceX’s Falcon Heavy or ULA’s planned next-generation rocket are ready to take over launching the U.S. government’s heaviest spy satellites. 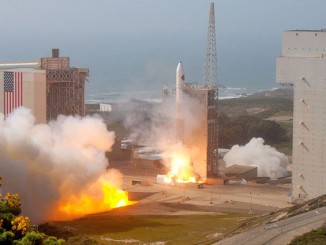 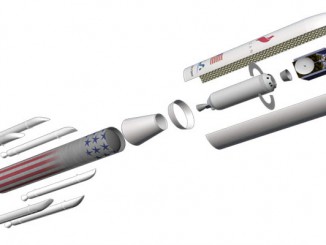 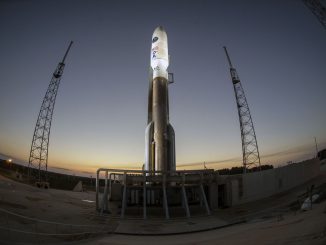